One of Vancouver’s legally protected heritage homes gets a new owner. For $2.5 million, a buyer has taken Williams House, a 1911-1912-era home in Kitsilano. The purchase tag goes over the original asking price by over half a million dollars. 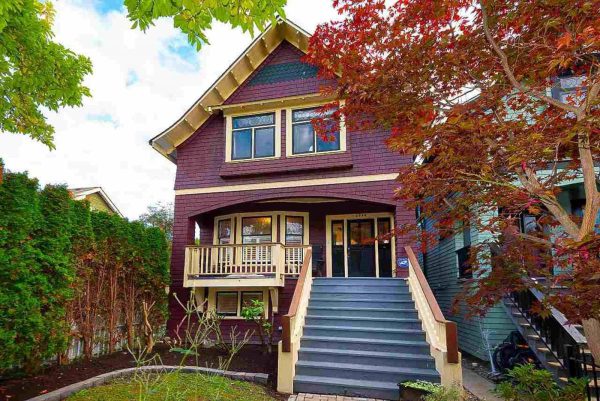 (GEORGIA STRAIGHT- Known as the Williams House, the residence marketed by Sutton Group-West Coast Realty was repainted in 2005 to match its original colours.)

As a designated heritage property, the home is protected from inappropriate alterations and demolition. The Vancouver Heritage Foundation (VHF) explains online that the Williams House is secured through an agreement with the City of Vancouver.

The home acquired the protection in 2005 as a result of its voluntary designation as a heritage property by the owners at the time. The owners also at the time participated in VHF’s True Colours, and Restore It Programs. “This two storey wood frame house has both architectural and historical significance,” according to the VHF. The home was constructed in 1911-1912 by builders Bentley and Wear as “one of a cluster of six houses on this side of the block”.

“The house is a good example of the early Craftsman style,” the VHF noted. Features include a “full-width arched front porch, a bay window with leaded glass in the upper sashes, and an oriel above with a similar pattern of leaded glass in the paired transoms”.

“Anthony Williams, an immigration inspector with the federal government, owned the house from 1926 until he died in 1941, followed by Florence Williams, a school teacher, who owned it until she died in 1983,” the heritage group recalled.

Moreover, the house was “repainted to a colour scheme matching its original colours in 2005 using a VHF True Colours Grant”. “The house has also undergone restoration in the form of a complete exterior restoration (VHF Restore It 2005), and a new roof (VHF Restore It 2012),” the VHF stated on its website.

John Bishop and Executive Chef Kai Leitner are honouring our region and this season by offering a...

Kitsilano’s Home Seller’s Guide You need a professional on your side when you decide ...