Check Out The Design Of Kitsilano’s Arbutus SkyTrain Station

The provincial government has opened the first phase of public consultation on the station designs and layouts of SkyTrain’s Millennium Line Broadway Extension, including Kitsilano’s Arbutus Station. 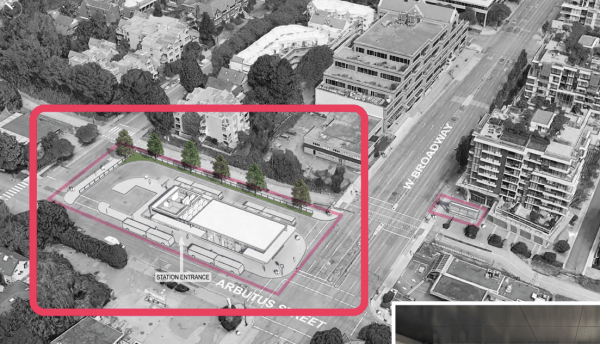 The latest designs for the six underground stations have undergone further planning and are aligned with TransLink’s latest standards for the Evergreen Extension and the recently completed Expo Line station renovations, including the incorporation of both up and down escalators — in addition to staircases and elevators — to reach all levels of the station.

Arbutus Station will have glass walls on three sides to maximize visibility. The standalone structure is surrounded by the bus exchange for the 99 B-Line (future RapidBus) that will operate a truncated route between Arbutus Station and UBC Exchange.

A canopy fully wraps this building to protect passengers from the weather while waiting for the bus.

A secured bike parkade is located at the north end of the building at ground level, and a retail unit and Transit Police sub-office are located in the underground concourse level.

The emergency entrance building for Arbutus Station is located across the street, within the plaza next to the BC Liquor store and the 99 B-Line’s existing eastbound stop.

The Arbutus Greenway to the east will be reconfigured to accommodate the station entrance building and bus exchange. Arbutus Station will carry a design that seamlessly allows for the future Millennium Line extension to UBC.

Check out the complete current plans for Arbutus Station.

Properties With a View

Find the best MLS™ Listings for properties with a view in Vancouver, BC Canada. Current Listings ...

NEW APPS AND PRODUCTS FOR YOUR HOME There are so many cool new tools, apps and technological adva...